Nearly 40 years ago formal investigations for the ancient history of Valle Crucis began and ever since archaeologists and students affiliated with Appalachian State University have been investigating a rock outcropping near the Watauga River. Painstaking removal of layers has revealed 10,000 years of human presence in this picturesque setting. For more on this prehistoric discovery, click here. 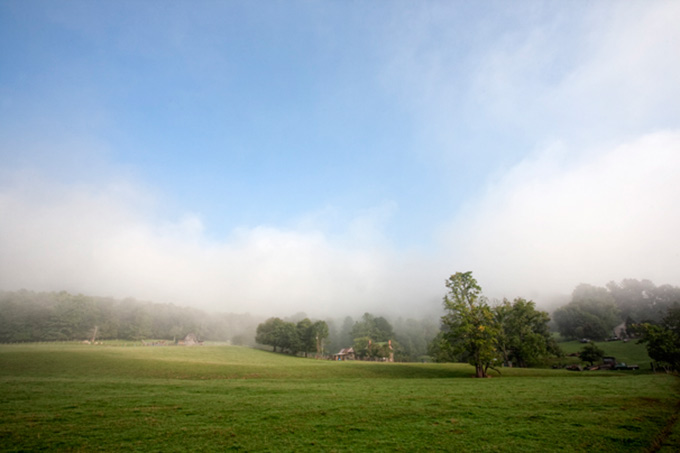 Although the first recorded land sale in the area was 1700s, little progression towards a formal community and today’s inhabitance occurred until 1840. A botanist from New York was searching the North Carolina mountains for wild plants when he came upon a beautiful valley. Susan Fenimore Cooper explained his journey in 1890, writing,

[push]“It was in the wild, yet luxuriant region so full of interest to the botanist, that the traveler from New York wandered for a time, gathering treasures for his herbarium, and delighting in the grand beauty of the country. He also became interested in the families living in the rude cabins where he sought shelter. He found them poor, but simple, honest, and kindly, though very quiet in manner. They received him hospitably and gave him the best of their mountain fare.”[/push]

“It was in the wild, yet luxuriant region so full of interest to the botanist, that the traveler from New York wandered for a time, gathering treasures for his herbarium, and delighting in the grand beauty of the country. He also became interested in the families living in the rude cabins where he sought shelter. He found them poor, but simple, honest, and kindly, though very quiet in manner. They received him hospitably and gave him the best of their mountain fare.”

The botanist stopped in Raleigh, North Carolina on his way back to New York and met with Episcopal Bishop Levi Silliman Ives to share his experience in the valley, explaining

“In 1840 the valley of the Watauga, in North Carolina, was a secluded region, isolated and forgotten, a mountain wilderness, showing only here and there the first rude touches of civilization. The narrow, winding trail or foot-path, the rough sled-road, often dangerous for wheels, here and there a log cabin, with a narrow, rough clearing about it, or at long interval a rube saw-mill or grist mill, with perchance a small, unpainted frame dwelling, or a blacksmith shop and a humble backwoods store, marking the beginning of a hamlet, such were the only traces of human habitation to be found on the banks of the stream. But the highland valley was magnificent in natural beauty. It lay in the elevated country between the Blue Ridge and the Alleghenies, nearly three thousand feet above the sea, while grand old mountains of successive ranges, broken into a hundred peaks, rose to nearly double the height on either hand, many so near that their distinctive features could be clearly seen, while others were only dimly outlined in the distance.  These mountain ranges were peculiarly interesting, differing in some particulars from those of any other parts of the country. The vegetation was singularly rich and varied. The valley, entirely shut in by forest-clad mountains, was watered by three small, limpid streams, two of them leaping down the hillsides in foaming cascades; the principal stream, formed by the junction, after a short course of two miles, passing through a narrow gorge, threw itself into the Watauga.” – from “A Sketch of Missionary Life at Valle Crucis, 1842-1862”

Bishop Ives was searching for a mountain location to begin missionary work and was intrigued by the botanist’s report of the area. In July 1842, Ives made his first trip and upon seeing three creeks intersecting to form a cross, named the area Valle Crucis, Latin for Vale of the Cross.

In December 1842, Bishop Ives sent a priest to begin the Episcopal ministry in Valle Crucis. During the next 10 years, land was purchased, simple buildings were constructed to start the Mission School, and the Society of the Holy Cross, the first monastic order since the English Reformation in the 1500s, was formed.  Ives sent William West Skiles to Valle Crucis to supervise the farming operation. Skiles was ordained a Deacon in 1847 and was instrumental in building St. John’s Episcopal Church in 1862. In the book, “A Sketch of Missionary Life at Valle Crucis,” Skiles described how people arrived to the first church service,

“It was well attended. Men and women came in, many on foot, some on horseback, the wife in sunbonnet and straight narrow gown, riding behind her husband. Here and there a woman was seen mounted on a steer, with a child or two in her arms, while the husband, walking beside them, goad in hand, guided the animal over the rough path. The women all wore sunbonnets or handkerchiefs tied over their heads. Some were barefooted. There were many more feet than shoes in Valle Crucis at that time.”

Brother Skiles died in December of 1862 and the work of the church declined rapidly.

In 1895, a renewed interest in the Mission School by the Episcopal Church led to the development of 435 acres of land with apple orchards, a dairy farm, construction of a sawmill and wagon factory, and a hydroelectric power plant. The school provided classes for first grade through high school as well as employment for people in the community. It was the center of all the social activity in the community. In 1925 the present-day Church of the Holy Cross was built, modeled on a medieval monastery in Wales and is noteworthy for its architecture.In 1936, the Mission School became a boarding school for girls but was closed in 1943, partly due to the war. For the next twenty years the Mission School was used as a summer inn and formally became an Episcopal Church Conference Center in the 1960s. Bishop Ives House is the only surviving structure from the formation of the Episcopal Mission. Originally built in the valley the house was relocated up the hillside in 1956 opposite the Church of the Holy Cross, where today it serves as the church library and rector’s study.

As the Mission School and affiliated aspects thrived, other members of the initial Valle Crucis community began to grow as well. With humble beginnings in 1812, what currently is included with The Mast Farm Inn complex, was simple two room cabin that today acts as the oldest inhabitable log cabin in the Watauga County. The family prospered in the cabin throughout the 1800s and in 1885 Finley and Josephine Mast built the first part of a new farmhouse. By 1915, the home had to be enlarged to accommodate tourists. The inn was often referred to more often as “Aunt Josie’s and Uncle Finley’s” than “The Mast Farm” and had 13 bedrooms and one bath. Aside from the responsibility of managing the inn, garden and dairy, Aunt Josie became a renowned weaver in the 1900s, with pieces she made displayed at the White House and Museum of American History today. The inn remained occupied until Finley and Josie’s son died, but then stood empty until 1984, when the property was purchased, fully restored and has been open as an inn ever since.

In a similar pattern of expansion to the Mast’s inn, Henry Taylor built a general store in Valle Crucis in 1882 and opened it in 1883. The Taylor’s also added rooms to their home over the years to accommodate travelers and guests. Renting rooms to traveling salesmen the Taylor’s would charge $.25 per overnight stay. The home was at one time listed as a hotel in a state business directory as the popularity of the hidden mountain retreat soared. With business booming down the hill at his general store in 1897, Taylor sold half interest of the company to one of his employees, William Wellington Mast. The store was known as the Taylor and Mast General Store until 1913, when W.W. purchased the entire business and became simply Mast General Store.

Just two-tenths of a mile from the Mast General Store R.L. Lowe of Banner Elk erected the Watauga Supply Company store building in 1909, providing competition for the established Mast General Store. Ownership of the building changed hands several times in the following years before Aubyn Farthing bought the business, and the store became commonly known as Farthing’s.

Across the street from Farthing’s for a short time was the Valle Crucis Bank, which opened in January 1914. The rustic building had a vault, safe and single adding machine. When the bank was robbed in 1927 it closed within the year. Since then the interior of the building has been significantly remodeled and is currently used as a residence.

By 1890, Valle Crucis was the third most populated rural township in Watauga County. Families that settled here- Hicks, Ward, Baird, Taylor, Shull, Davis, Johnson, Mast- found the rich, fertile soil to be excellent farmland and a place to call home. These families helped shape Valle Crucis and many are still vitally important to the community today.

For the next 60 years, the Mast family carried all of the items their neighbors might need such as cloth, flour, sugar, coffee, boots, overalls, seed, cookware, plows, cradles, and even caskets at their general store. Credit was extended to those who needed it and payments were often taken in trade. As W.W opened the store each day at 5:30 a.m. and remained open until late in the event, the Mast Store not only offered merchandise but also served as a community-gathering place. A trip to the store almost always included sitting a spell around the pot-bellied stove to share local news and gossip. When someone in the community was sick or needy, the word spread quickly andneighbors rushed to help each other.

The Mast family sold the store in 1973 and that year the site was placed on the National Register of Historic Places as one of the finest remaining examples of an old country general store. The store closed in November of 1977, supposedly just for the winter. However, the owners never reopened the store and it remained closed for two years.

A young couple bought the Mast General Store in 1979 and opened the doors for business in June of 1980. The new owners built upon the traditions set by the Mast family by caring for their community, carrying quality goods at fair prices, and providing excellent service to their customers. In 1982, owners of the Mast Store re-opened the old Farthing building just down the road and it became the Mast Store Annex. The Original Mast Store and Annex remain as the cornerstones of the community and the other historic properties are still very much alive in the valley.